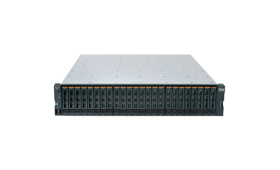 The IBM Storwize V3700 models are described in Table 1-2. All models have two node canisters. C models are control enclosures and E models are expansion enclosures.

The drives are positioned in four columns of three horizontal-mounted drive assemblies. The drive slots are numbered 1 – 12, starting at upper left and going left to right, top to bottom.

The drives are positioned in one row of 24 vertically mounted drive assemblies. The drive slots are numbered 1 – 24, starting from the left. There is a vertical center drive bay molding between slots 12 and 13.

In Figure 1-4, you can see that there are two power supply slots at the bottom of the enclosure. The Power Supply units are identical and exchangeable. There are two canister slots at the top of the chassis.

In Figure 1-5, you can see the rear view of an IBM Storwize V3700 expansion enclosure.

Two USB 2.0 ports (one port is used during installation)

The battery is used in case of power loss. The IBM Storwize V3700 system uses this battery to power the canister while the cache data is written to the internal system flash. This memory dump is called a fire hose memory dump. After the system is up again, this data is loaded back to the cache for destage to the disks.
Figure 1-6 also shows the following ports, which are provided by the IBM Storwize V3700 node canister:
Two 10/100/1000 Mbps Ethernet ports

Port 1 (left port) must be configured. The second port is optional and is used for management. Both ports can be used for iSCSI traffic. For more information, see Chapter 4, Host configuration.
Two USB ports.

One port is used during the initial configuration or when there is a problem. They are numbered 1 on the left and 2 on the right. For more information about usage, see Chapter 2, Initial configuration.
Four serial attached SCSI (SAS) ports.

The two nodes act as a single processing unit and form an I/O Group that is attached to the SAN fabric, an iSCSI infrastructure or directly attached to hosts via FC or SAS. The pair of node is responsible for serving I/O to a volume. The two nodes provide a highly available fault-tolerant controller so that if one node fails, the surviving node automatically takes over. Nodes are deployed in a pair that is called an I/O Group.

The IBM Storwize V3700 only supports one I/O group in a clustered system.

Figure 1-7 shows an overview of the expansion enclosure.

The expansion enclosure power supplies are the same as the control enclosure. There is a single power lead connector on each power supply unit.

Each expansion canister that is shown in Figure 1-8 provides two SAS interfaces that are used to connect to the control enclosure and any optional expansion enclosures. The ports are numbered 1 on the left and 2 on the right. SAS port 1 is the IN port and SAS port 2 is the OUT port.

Table 1-4 shows the IBM Storwize V3700 Disk Drive types that are available at the time of writing.