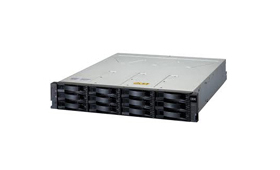 Offering substantial improvements at a price that fits most budgets, the DS3500 delivers superior price-to-performance ratios, functionality, scalability and ease of use for the entry-level storage user.

The IBM DS3500 is ready for the move to 10 Gb iSCSI with the four ports that it has. It provides backwards compatibility with 1Gb iSCSI environments, protecting your current investment while transitioning to the network of the future. It also maintains simplicity by using a standard RJ45 connection without the need of additional SFPs.

The DS3500 is available with single or dual controllers, with the option to further enhance the performance of your dual controller system with the Turbo Performance option. You choose the configuration to match your current performance requirements and budget, and IBM offers a way to protect your investment with an upgrade path to later add the options that you need. With its simple, efficient, and flexible approach to storage, the DS3500 is a cost-effective, fully integrated complement to IBM System x® servers, IBM BladeCenter®, and IBM Power Systems™.

The DS3500 is available in two models, and each model can have either one or two controllers:

The capacity of a DS3500 system can be increased to up to 192 disk drives with the attachment of EXP3500 expansion units. It is also available in two models:

All models support dual-port, high-performance, high-capacity nearline and self-encrypting drives. Near-line SAS and SED disk drives of the same form factor can be intermixed within the appropriate DS3500 or EXP3500 enclosure. You can even intermix EXP3512 and EXP3524 expansion units behind either a DS3512 or DS3524 storage system.

Figure 2 shows the rear view of the DS3500 with Native SAS host ports only.

Table 5 lists the option numbers and the feature codes of the various cables that can be ordered with the DS3500.

Table 6 lists option numbers and the feature codes of the various upgrade options that can be ordered with the DS3500.

Table 7 lists option numbers and the feature codes of the various disk drives that can be ordered with the DS3500. The same part numbers also apply to the EXP3500 Expansion units.

Each of these is shown in the following figures.

Note: Only one type of optional interface can be added to any one DS3500 storage server. Mixing host interface cards between controllers in the same DS3500 is not supported.

Figure 4 shows the connections of a controller without a HIC installed.

Figure 6 shows a rear view of the DS3500 with a iSCSI daughter card installed. It is essentially just the base controller with four additional RJ-45 Ethernet ports, all usable for iSCSI traffic.

Figure 7 shows a rear view of the DS3500 with a FC HIC installed, which adds four FC 8 Gbps connections, which can also negotiate at 4 Gbps or 2 Gbps.

Each DS3500 and EXP3500 enclosure comes with two high-efficiency, removable, 585-watt power supplies (Figure 8) as standard. Each power supply has two internal fans for cooling the enclosure. The four fans pull air through the drives from front to back across the drives. The DS3500 meets the Network Equipment Building System (NEBS) and European Telecommunications Standards Institute (ETSI) Telco specification requiring very robust abilities and support for 48 V DC power supplies.

In this section, we discuss essential characteristics of fiber cables and connectors. This information can help you understand the options that you have for connecting and cabling the DS3500 Storage System.

Fiber cables are basically available in multi-mode fiber (MMF) or single-mode fiber (SMF). MMF allows light to disperse in the fiber so that it takes many paths, bouncing off the edge of the fiber repeatedly to finally get to the other end (multi-mode means multiple paths for the light). The light taking these various paths gets to the other end of the cable at slightly separate times (separate paths, separate distances, and separate times). The receiver has to determine which in-coming signals go together.

SMF is so thin (9 microns) that the light can barely “squeeze” through and it tunnels through the center of the fiber using only one path (or mode). This behavior can be explained (although not simply) through the laws of optics and physics. The result is that because there is only one path that the light takes to the receiver, there is no “dispersion confusion” at the receiver. Table 8 lists the supported distances.

The IBM Storage System DS3500 uses the same IBM DS Storage manager as the DS5000 product line and the legacy DS3000 models. Through this software, it is possible to perform administrative tasks such as creating arrays, logical drives, assigning logical drives to the host servers, setting up FlashCopy and Volume Copy, capturing logs for troubleshooting, and so on. Figure 10 shows the IBM System Storage DS Storage Manager Enterprise Management window.

The Turbo Key is an optional premium feature that, when enabled, boosts the performance of a storage system across both throughput and IOP workloads, allowing you to take full advantage of DS3500 performance capabilities with bandwidth-intensive applications. The DS3500 Turbo Key offers:    Scalability to midrange performance and features starting at entry-level prices
Efficiencies to help reduce annual energy expenditures and environmental footprint
Simplicity that does not sacrifice control with the perfect combination of robustness and ease of use

Figure 11 provides a comparison with and without the Turbo Key premium feature enabled.

Storage partitioning adds a high level of flexibility to the DS3500 Storage System. The DS3500 comes with four partitions by default, which can be expanded to a maximum of 128.
It enables you to connect multiple and heterogeneous host systems to the same storage server, in either stand-alone or clustered mode. The term storage partitioning is somewhat misleading because it actually represents a host or a group of hosts and the logical drives that they access. Without storage partitioning, the logical drives configured on a DS3500 Storage System can only be accessed by a single host system or by a single cluster, which can lead to inefficient use of storage server hardware unless the use of the DS3500 Storage System is dedicated to a single host (for example, SVC or v7000 attachment).

With the new FlashCopy Scheduler, its now possible to schedule FlashCopy images via the user interface. This can be applied to new and existing snapshot volumes. Figure 12 and Figure 13 show the new menu item from the GUI interface.

Figure 13. Simple and effective menu for scheduling a FlashCopy Image

The Volume Copy premium feature creates a physical copy of a volume. Volume Copy is used with FlashCopy to create a physical copy of your data with minimal disruption to applications and production processes. Upon completion of the Volume Copy process, the new volume can be mapped to any host, and it functions as a standard volume. Volume Copy can also be used to redistribute data within the DS3500, moving volumes to a different disk drive technology or RAID level. Both FlashCopy and Volume Copy are performed by the DS3500 storage system, so no host server resources are used. A copy can be initiated while the source volume remains available for writes. Figure 14 shows Volume Copy in action.

The problem reporting utility provided by RSM for Storage automatically creates an entry in the IBM call management system for each subsystem that reports a problem. This is the equivalent of placing a voice call to IBM Service for a problem. Once in the system, problems are responded to with the priority specified by the maintenance agreement in place for the product.

Fix Central provides fixes and updates for your system’s software, hardware, and operating system. To download fixes, drivers, and firmware for the IBM System Storage DS3500, select the corresponding fields on the following IBM website:

This section describes the requirements and best practice guidelines for connecting EXP3500 enclosures to a DS3500 storage subsystem.

Figure 18 shows the SAS connections between a single controller DS3500 subsystem and three EXP3500 enclosures, with a single ESM installed in each EXP3500. This configuration is a fully functional configuration, but there is no redundancy on the drive-side connections.

Figure 19 shows how to correctly cable a dual controller DS3500 to a single EXP3500 enclosure with two ESMs installed. This configuration provides redundancy on the drive-side connections.

Figure 20 shows the SAS cable connections when using the top-down/bottom-up cabling layout with the DS3500 storage subsystem at the top. This is the preferred SAS expansion cabling for when you are connecting two or more EXP3500 enclosures, up to the supported maximum of eight EXP3500 enclosures.

This section outlines the supported topologies for a DS3500 considering FC, iSCSI, and SAS connections. There are examples for both single and dual controller DS3500 storage subsystems.
General rule: Although some of the examples shown next are valid supported configurations, there are some with no redundancy of host-side connections. Always use redundant host-side connections instead.
FC direct attachment: The DS3500 storage subsystem supports both direct attached and SAN fabric attached hosts. You can attach up to four direct-connected hosts or up to 64 host servers in a switched fabric SAN infrastructure. This section describes sample configurations of direct-attached Fibre Channel host servers.
SAS connections: Host server SAS HBAs are used to connect to the DS3500 SAS ports. Each DS3500 controller can have up to four SAS host ports when you install the optional SAS host interface adapter. When the optional SAS host interface adapter is installed, the DS3500 can support up to 28 Blade Center hosts when attached to the SAS Connectivity Module for IBM Blade Center and up to four hosts in a direct attached host environment.

Every DS3500 is covered by the below warranty:

Optional IBM features initially installed in an IBM system carry the same warranty and warranty service support category as the system. If installed after the initial system installation, they carry the balance of the system warranty or the optional feature warranty, whichever is greater.

IBM provides replacement CRUs to you for you to install. CRU information and replacement instructions are shipped with your machine and are available from IBM upon your request.